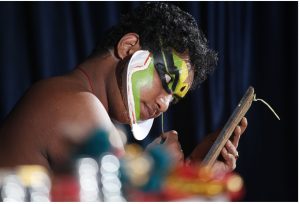 One of the most interesting aspects of Kathakali is its elaborate make-up code. Characters are categorized according to their nature. This determines the colours used in the make-up. The faces of noble male characters, such as virtuous kings, the divine hero Rama, etc., are predominantly green. Characters of high birth who have an evil streak, such as the demon king Ravana, are allotted a similar green make-up, slashed with red marks on the cheeks. Extremely angry or excessively evil characters wear predominantly red make-up and a flowing red beard. Forest dwellers such as hunters are represented with a predominantly black make-up base. Women and ascetics have lustrous, yellowish faces. 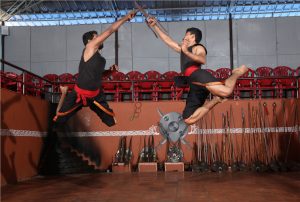